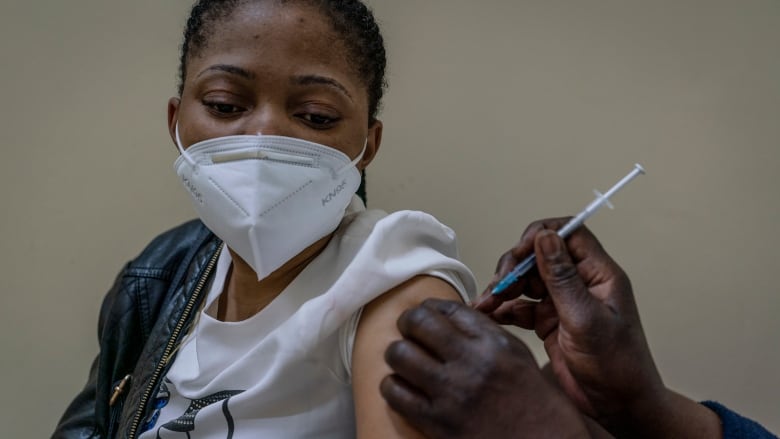 A woman is vaccinated against COVID-19 at the Hillbrow Clinic in Johannesburg, South Africa. Canada’s recent response to the pandemic mirrors its approach to the impact of climate change in Africa, writes Bianca Mugyenyi. (Shiraaz Mohamed/The Associated Press)

After the Conservative public safety critic called on the government to act against the “African variant,” Canada banned travel from the southern part of the continent. This was Ottawa’s way of “rewarding” South Africa for alerting the world to the Omicron variant of SARS-CoV-2.

The federal government subsequently added Nigeria, Malawi and Egypt to an Africa-only no-fly list, despite more Omicron cases confirmed in various European nations. Concurrently, the government introduced a rule requiring Canadians in southern Africa wanting to return to take a COVID test in a third country. Apparently, Ottawa trusts South African scientists’ ability to sequence a new variant but not its PCR tests.

The World Health Organization (WHO) condemned the test measures and travel ban Canada introduced. This is not the first time Ottawa has been at odds with the WHO regarding pandemic inequity.

Canada has failed to support a World Trade Organization patent waiver for COVID-19 vaccines. At the same time as Canadian officials have worked against a year-old South African and Indian proposal designed to speed up vaccinations in poorer countries, they have been accused of hoarding COVID vaccines, purchasing enough doses to inoculate every Canadian five times. These measures have contributed to a stark inequity in which six per cent of Africans are fully vaccinated, which increases the ability of the virus to spread and mutate.

The “racism” McPherson sees in Canada’s COVID-19 policies is not new. Canada’s recent response to the pandemic mirrors its approach to the impact of climate change in Africa.

Environmental changes have already begun making life difficult for many on the continent, yet Africans have contributed little to the problem. With one of the world’s highest per capita carbon footprints and GDPs, Canada is effectively ignoring the glaring inequity by continuing to extract some of the planet’s highest greenhouse gas-emitting oil.

A quick look at the history of Canadian policies on the continent reveals at best indifference and at worst contempt toward Africans.

In 2011, for instance, a Canadian general led the NATO bombing of Libya, despite vigorous opposition from the African Union. The AU argued the war would destabilize that country and the region, which is precisely what occurred.

And even our claimed “progressive” history regarding South Africa is ambiguous. Canada continued relations with the apartheid regime for two decades after African governments sought to isolate the white minority ruled country. During his time as prime minister Lester Pearson told Parliament, “The Canadian government can understand the fears of white South Africans about the possibility of being submerged and eventually forced out of their homeland.”

In the 1970s, Ottawa passively supported a coup by Ugandan military leader Idi Amin against President Milton Obote, the leader who nationalized the operations of Canadian-based Falconbridge and Bata Shoes. In the 1960s, the Canadian military played a significant role in the downfall of pan-Africanist icons Patrice Lumumba and Kwame Nkrumah. After the military ousted Nkrumah, the Canadian high commissioner in Accra, C.E. McGaughey wrote that “a wonderful thing has happened for the West in Ghana and Canada has played a worthy part” through its military training mission. In the Congo, Canadian soldiers were the backbone of a controversial UN mission that undermined Lumumba.

While European powers dominated the region, Ottawa supported colonial rule. Canadian trade commissioners worked to develop commercial relations and, in the 1950s, Canada gave billions of dollars in NATO mutual aid weaponry to the colonial powers as they suppressed resistance movements in Algeria, Kenya and elsewhere. Two Canadians were even governors of Kenya, Northern Nigeria and Ghana.

In the late 1800s, Canada contributed to the scramble for Africa. Dozens of Royal Military College of Canada-trained officers led military missions, built railways and surveyed colonial borders. In Canada’s largest contribution to British imperialism, 400 Canadian soldiers were sent to Sudan in 1884 and 7,000 dispatched to southern Africa a decade-and-a-half later.

It is clear that Canada’s unfair COVID policies in Africa reflect a deeper history.

Sweden could not expect Turkey’s support for its Nato...
Read more
COVID-19

More than 25% of survey respondents have avoided care...
Read more
News By Country