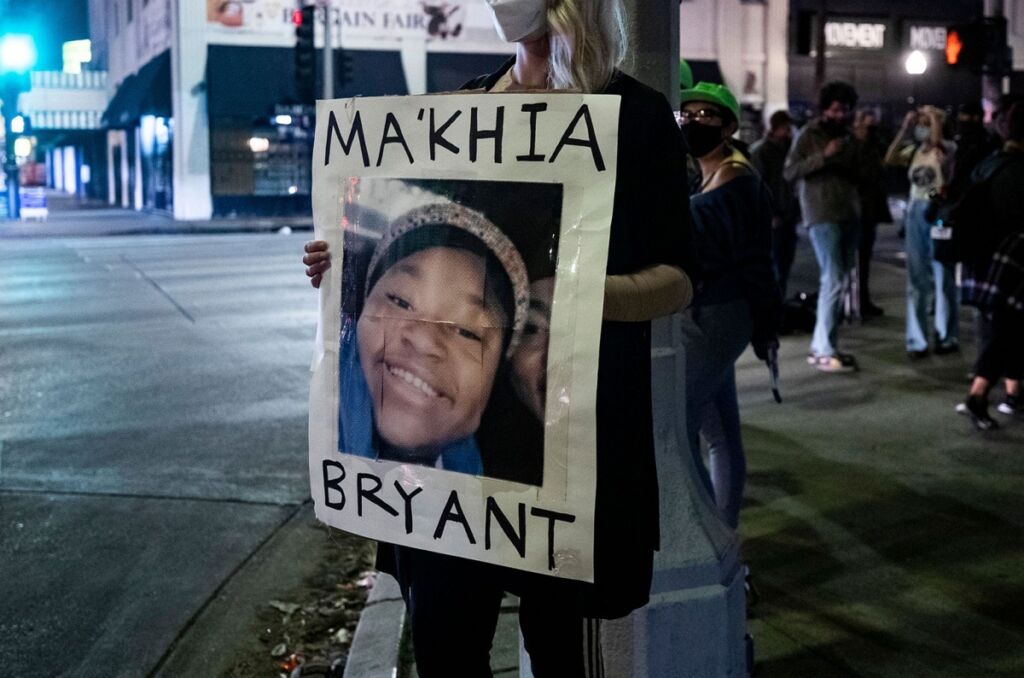 The Nature of This Flower Is to Bloom Rebellious. Living. Against the Elemental Crush — Alice Walker, “Revolutionary Petunias” (for Ma’Khia in National Poetry Month)

Four shots. Tuesday, four shots from a terrorist claimed a vibrant young life. They shattered the fleeting justice celebrated in Black communities around the world after a Minneapolis jury found Derek Chauvin guilty of manslaughter in the murder of George Floyd.

On Tuesday, Ma’Khia Bryant, a 16-year-old Black girl, was killed by four bullets fired by a Columbus, Ohio police officer who used deadly force after responding to her 911 call for help. According to testimony from her family, Ma’Khia was defending herself from “several adult women” who had come to fight her at the foster home where she was living. She was slain the same afternoon Chauvin has led away from the courtroom in handcuffs.

As George Floyd’s brother Philonise noted after the verdict, the decision was bittersweet, because “we will have to be here (protesting and marching) for the rest of our lives”. His words hold painful resonance for the family of Daunte Wright, gunned down last week by a white female police officer in Brooklyn Center, Minnesota, as well as that of Ma’Khia and so many others grieving police murder victims brutally denied justice.

Ma’Khia’s murder has been contrasted with the kid-glove treatment of mass murderers Kyle Rittenhouse and Dylan Roof, young white males who were coddled by police during their apprehension and arrest. It goes without saying that killer white boys are celebrated and lionized, because, as Stokely Carmichael once said, “Behind (them) stand the local police force, the state militia, the Army and the Navy.”

By contrast, numerous studies and analyses have shown that Black girls are routinely adultified in mainstream perceptions of feminine respectability. They are more likely to be viewed as older, physically threatening, more mature, and more “inherently” sexual than non-black girls and young women.

In policing, the criminal justice system, and K-12 school discipline, they are never given any “benefit of the doubt” by adult authority figures. Time and again, Black folks have seen that doubt for white children leads to the benefit of therapy, counseling, relationship-building, and case management.

The circumstances leading up to Ma’Khia’s killing also highlight the vulnerability of Black girls in foster care. Black foster girls across sexuality experience high rates of sexual, domestic, and intimate partner violence and are at greater risk for sex trafficking victimization and incarceration. According to data in a 2015 study by Rights4Girls, Black girls had higher levels of “dual system” involvement with both the juvenile justice system and child welfare system than did Black boys. Repeated contact with law enforcement inflicts lifelong trauma on foster care youth, who are disproportionately pipelined into adult prisons in a vicious cycle of criminalization.

While it is all but certain that Ma’Khia would still be alive if she were a white girl, the fact that white male mass murderers receive deference and law enforcement protection makes the racial disparities of deadly force even more despicable. In response to global Black Lives Matter racial justice uprisings around George Floyd’s murder, the House’s 2021 George Floyd Justice in Policing Act (sponsored by  Congresswoman Karen Bass) would institute restorative approaches to public safety, increase funding for mental health providers and community-based first responders, end qualified immunity, a crackdown on police sexual misconduct, create a national database for use of force deaths, and reduce reliance on militarized enforcement equipment.

While this bill is an important first step, it is not abolitionist, and thus does not go far enough to address the fundamental roots of policing in systematizing anti-Blackness and destroying Black self-determination and bodily autonomy. Moreover, its misguided emphasis on “best practices training” draws from a reformist ethos that ignores the insidious power of the Thin Blue Line across race, gender, sexual orientation, class, and political ideology (indeed, the white woman who killed Wright was a twenty-six year police force veteran and training instructor). Responding specifically to the over-policing and criminalization of Black girls, Massachusetts Congresswoman Ayanna Pressley’s sponsored the 2019 Ending Push Out Act.

The bill languished in the GOP-controlled Congress but Pressley recently reintroduced it. With a similar emphasis on mental health as the George Floyd Act, the Push Out Act would provide billions of dollars in funding to school districts that ban punitive discipline policies and practices, and end contracts to police. While Congresswoman Pressley “acknowledges one piece of legislation will not undo generations of trauma, (she) wants to use this inflection moment to focus on reconstruction.”

Again, simple “reconstruction” is inadequate for a white supremacist, capitalist, heteropatriarchal system that thrives on Black death and disguises state-sanctioned terror against communities of color as “democratic” law and order. In his 1935 book Black Reconstruction in America, W.E.B. DuBois outlined the foundation for an “abolition democracy” (later championed by Angela Davis in her radical work and organizing) based on the destruction of state regimes of incarceration, policing, confinement, and labor that effectively extended slave-like conditions for African Americans long after chattel slavery’s abolition.

Although federal legislation can provide momentum for the city and local movements that are already underway to dismantle policing and redress the harms of the carceral state, the lives of Ma’Khia, and the youth coming behind her, demand more from national progressive leadership than a mere rebranding of the police state.

Remarking on Ma’Khia to a reporter, her mother, Paula Bryant, said, “She was a loving, peaceful little girl, she was an honor roll student.” This precious image of girlhood is a testament to an unspeakable loss, one that calls for abolition, not reform, blooming “rebellious against the elemental crush” that would seek to extinguish the revolutionary light of little Black girls.

The announcement last month that the Biden administration would...
Read more
North America

Given President Biden’s decision to send 31 of its...
Read more
News By Country

There are currently only two Jewish heads of state...
Read more