Media Once Again Trolling US Withdrawal from Afghanistan

As usual it comes in an outbreak of various “concerns,” which Caitlin Johnstone says are all designed to conceal the real agenda. 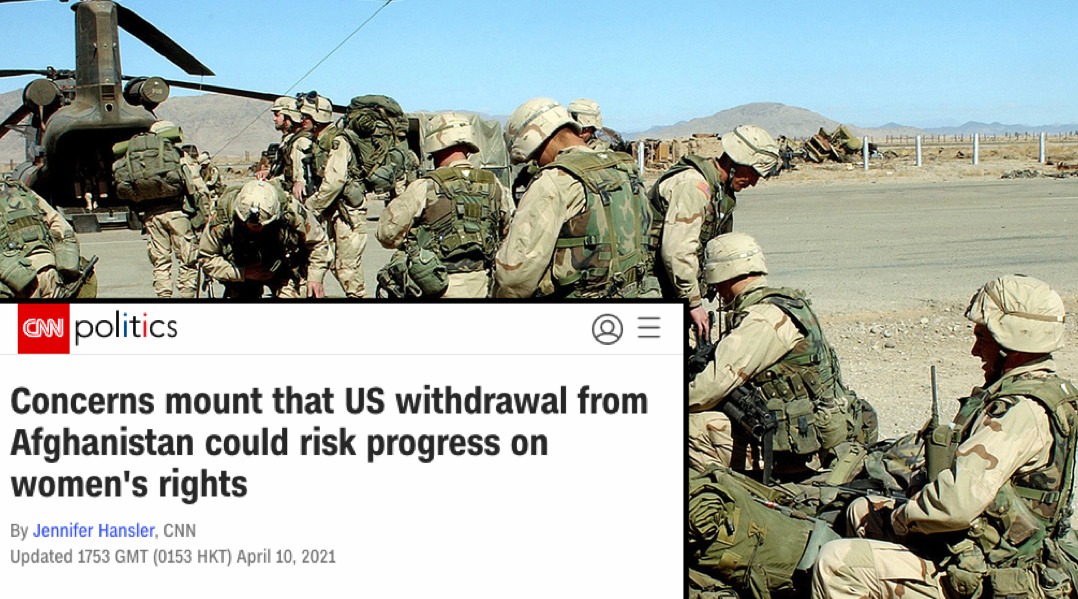 [President Joe Biden on Wednesday announced all U.S. combat troops would be withdrawn from Afghanistan by Sept. 1 this year. He rejected a “conditions-based withdrawal” saying the U.S. would never leave. Biden has received a barrage of criticism for wanting to withdraw and opposition from the Pentagon.]

“Concerns mount that US withdrawal from Afghanistan could risk progress on women’s rights,” blares a new headline from CNN.

“Concerns are mounting from bipartisan US lawmakers and Afghan women’s rights activists that the hard-won gains for women and civil society in Afghanistan could be lost if the United States makes a precipitous withdrawal from the country,” CNN tells us.

What follows is yet another concern-trolling empire blog about why U.S. troops need to stay in Afghanistan, joining recent others geared toward the same end like this CNN report about how the U.S. military will open itself up to “costly litigation” if it withdraws now because it signed defense industry contracts into 2023, and this one by The New York Times about a U.S. intelligence report urgently warning that a withdrawal from Afghanistan could lead to the nation being controlled by the people who live there.

This latest article by CNN features an extensive series of quotes by Annie Pforzheimer of the Center for Strategic and International Studies (CSIS) think tank regurgitating the tired old mantra that a withdrawal from Afghanistan needs to be “conditions-based” to ensure that no women will be mistreated if the U.S. ends its 20-year military occupation of the country.

CSIS, for the record, is funded by war profiteering corporations like Northrop Grumman and Boeing, as well as fossil fuel companies like Chevron, ExxonMobil and Saudi Aramco. It is also funded by plutocrats. It is also funded directly by the United States government and its allies. This article is precisely the sort of narrative management initiative that such think tanks exist for, and the fact that it’s considered normal journalistic practice to quote sources with such blatant ulterior motives as objective experts shows that Western news media is propaganda.

When think tankers like Pforzheimer babble about a “conditions-based withdrawal” from Afghanistan, they are lying about what the requisite “conditions” would actually be. A complete and total withdrawal will have nothing to do with the treatment of women. It will have nothing to do with whether defense contractors will sue the U.S. government or whether the Taliban will be able to retake control of the nation.

A complete and total withdrawal from Afghanistan will happen when Afghanistan ceases to be a vital geostrategic point of control, which effectively means the U.S. will maintain some sort of foothold in Afghanistan for as long as China, Russia and Iran remain sovereign nations.

A U.S. puppet regime in Beijing, Moscow, and Tehran. If that somehow happens one day, the empire will have no further use for Afghanistan. Those are the real “conditions.”

The U.S. empire does not care about women. The U.S. empire routinely kills women and creates lawless environments where rape and sexual slavery are commonplace with its military interventionism. What this hand-wringing about women’s rights in Afghanistan has actually accomplished is a convenient justification for further military occupation, a destructive industry of shady NGOs and functionally not much else.

But this argument wouldn’t even make sense if it was sincere.

The only way to argue with logical coherence that the U.S. should militarily occupy a nation to uphold liberal values is to also argue that the U.S. should invade and occupy all other nations in the world with illiberal cultural values and force them all to change at gunpoint. Unless you uphold this argument with logical consistency in this way (and almost nobody does this because that would be insane), it looks like you’re simply making up arguments to justify invading and occupying geostrategically crucial regions with great military and resource value. And, of course, this is exactly what you are doing.

So much empire propaganda is just concern trolling at mass scale. “Oh my, it sure is concerning how they’re abusing that poor oppressed population in that nation whose government we just so happen to want to topple. Sure we’d have to butcher mountains of human beings and destabilize entire vast regions in order to rescue them, but that’s a sacrifice we’d be willing to make. We are humanitarians, after all.”

“Concern” is the propaganda carrier for the most violent of interventions. If imperialism was a virus, “concern” would be the benign-looking shape it took so the body didn’t set off an immune response. “Concern” is the most Karen of manipulations.

Still it says a lot that they need to tug at our humanitarian heart strings like that in order to advance their empire-building agendas these days. It used to be stuff like “They’re savages and they need to learn about Jesus,” or even just “Your King has decreed that those people shouldn’t get to control the land they live on anymore.”

We’ve evolved as a society to the point where at least now they need to appeal to our better demons. Where they need to hide their disgusting agendas behind noble-looking ones.

Caitlin Johnstone is a rogue journalist, poet, and utopia prepper who publishes regularly at Medium.  Her work is entirely reader-supported, so if you enjoyed this piece please consider sharing it around, liking her on Facebook, following her antics on Twitter, checking out her podcast on either Youtube, soundcloud, Apple podcasts or Spotify, following her on Steemit, throwing some money into her tip jar on Patreon or Paypal, purchasing some of her sweet merchandise, buying her books Notes From The Edge Of The Narrative Matrix, Rogue Nation: Psychonautical Adventures With Caitlin Johnstone and Woke: A Field Guide for Utopia Preppers.

This article was re-published with permission.