“We should not allow the pandemic to slow-down the momentumj in our relations with Africa.” ~ Rejep Tayyip Erdogan. 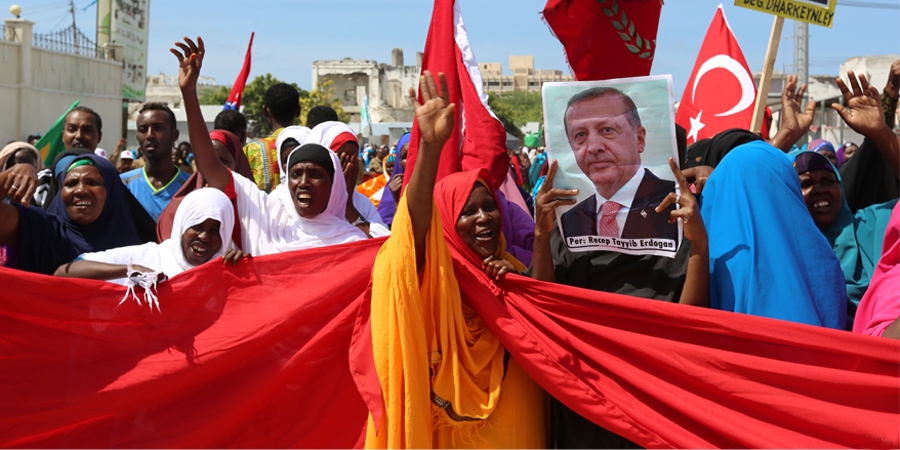 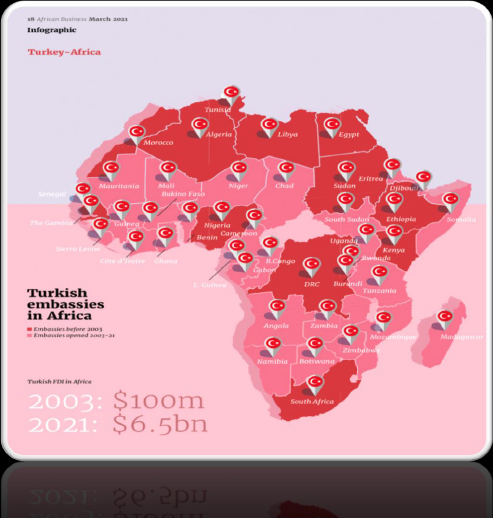 Imam Ahmed Gurrey sooth and received Ottoman support in his holly war against the combined Portuguese Slave- Traders & Mercenaries and Their Christian Abyssinian Highlanders- the Menelik between 1522- 1600. The Ottaman empire ruled somalia from (1559 -1867).

Thus, Modern Relations between Turkey and Somalia have a long and deep history dating back to the Ottoman Empire support for Imam Ahmed Guran(Gurey) war of Liberation again Christian Abyssinia( Ethiopia) invaders of Western Somalia between (1270-1555),

First Turkish Embassy was opened in Mogadishu, Somalia in 1979, under the Revolutionary Government of late President Mohamed Siyad Barre and Closed in 1991 during the civil war 1991-2000.and reopened on 1 November 2011. On 1 June 2014, Turkish Consulate General in Hargeisa started its operations.

Although Turkish Embassy in Mogadishu was closed in 1991, Turkey did not remain indifferent to the developments in the country, and tried to contribute to the establishment of peace and stability in Somalia.

Prior to 2003 elections of the “Party of Justice and Development”, AK Party Government, Turkish Foreign Policy was basically focused on a policy of “ Zero Problems  with its Neighbors”-  Russia, Greece, Iran,  Iraq, Syria  and  Armenia , which was based on principles of Peace at home and Overseas which was an out-look for EU integration policy.

Since AK Parti came to power in 2002, there has been a huge transformation in Turkish  foreign  policy.  Until  early  2000’s,  Turkey  had  largely  followed  a  one dimensional foreign policy based on Western orientation despite different push factors coming from society to reach out to different parts of the world such as the Middle East, Africa, Asia and the Balkans, but these shifts were neither deep-rooted nor comprehensive, rather based on ad hoc policies. Since 2002, one can talk about a ‘period of openings’ to pre viously neglected regions of the world in Turkish foreign policy to widen Turkey’s options in international politics. However, these openings have occurred not only in eco nomic and political terms, but also have strong social and religious dimensions. (2).

Turkey adjustment to the Global challenges and realities  of  volatile Globalization and New world Economic realities that faced Turkey since post 9/11. Since EU rejection of Turkish membership 1998 , Turkey was forced to look new modalities of FP strategies Globally other then EU based synergies.

Thus, “The new geopolitical realities of the 21st century have compelled many countries, including Turkey, to redefine their strategic priorities and adjust them selves to the new dynamics of multiple modernities and mulidirectional – mulitipolar world , This transformations are based on three inter-related areas of concern for Turkey: Global Political Structures, World Economy and the sociopolitical Order.” (3)

Since 2002 Turkey FP strategies has pivoted in expanding its relations with 54+ african cunteries at bar with China and France.

Thus, Turkey’s Out-ward looking FP dates back in the early 2002 under the helm of Dr. Ahmed Davutoglu was based on his (2001) book, “Stratejik Derinlik” (Strategic Depth) in vision of looking & considering Turkey as an “Afro-Eurasian “rather then “Euro-asian”. As a result of this ideological, Socio-economic , political, and military transformation has undertaken Globaly and African continent in particularly since 2002.

Turkey made use of its Geographical, Political, Military, Diplomatical by using and employing variouse agents of change such as: – Ankara exerts its influence on the continent in a multifaceted multi-pronged manner by engaging in trade, military cooperation, education, diplomacy, infrastructure, civil society, and political relations with African nations.

“Therefore, Davutoglu’s redifinition, Turkey’s geostratic position is reinforced by its historical and cultural ties to the counteries and nations in its neighbourhood . In this FP vision, Turkey has become a key country, emerging from its position of serving as a forward base for NATO during the Cold War. By using its geopolitical and geostrategic position, Turkey can become a regional as well as a global actor. As part of this vision, the government has pursued a policy of ending its long-term hositilites with its neighbours, mainly in the Middle East, which the Ottoman Turks had once ruled.(7).

Since coming to power in 2002, the AK Party has reviewed the means by which Turkey should strive to achieve greater prominence in international affairs, but it has kept political Islam’s vision of carving out a prominent role for Turkey internationally by cultivating closer ties with the wider Mus-lim world. the AKP has sought to attain a more influential role for itself in the existing international system. President Erdogan and AK party Govt., opposes the injustices of the current international system; he does not problematise the purported Judeo-Christian values that underpin the present international system. The AKP lambastes this system for being a construct of the post-World War II settlement, and for increasingly being detached from the reality of the present. Erdogan’s catchphrase “the world is bigger than five”, refers to the dominant position of the five permanent members of the United Nations Security Council in the international system.

Dr. Ahmed Davutoglu, therefore, may have expressed this grand vision more eloquently and put it into more sophisticated theoretical frameworks. However, Turkish foreign policy was by no mean solely the product of Davutoglu’s vision. It was more or less a shared vision of Turkish political Islam. President Erdogan was a firm believer in and supporter of the most part of Davutoglu’s foreign policy vision and Actions.(8)

In the last 15 years Turkey has infested heavily in Africa in Infra-structure, Agriculture, Ports and Railways, Education, Hospitals and Opened its first Military Base in Mogadishou, Somalia in 2017 training Somali National Army(SNA) and rehabilitating, rejuvenating ,re-arming SNA. Turkish military base in Mogadishu worth $50 million, Ankara’s largest overseas base. Over 5000 Somali trainees of Officer and Non-Commissioned Officer Corps had been already trained both in the Mogadishu Turkish – Somali military Base and further Military training in Turkey Military Academies. Turkey is set to build a Military force of at least 25, 000 strong.

Turkish new Foreign Policy pivot and activism towards Africa is based on Three principles of Economic and Political Justice, 2) Balance between National Security , and Social Justice and Democracy 3) Win- Win Economic cooperation & Integration  and  economic development among Turkey and African nations. As well as Humanitarian support and Human development.

Turkey obtained the status of observer state within the African Union in 2005. Three years later, in 2008, the first Turkey-Africa Summit was organized with the participation of 50 African states.

This summit 2011 (Turkey -Africa ) aimed at exploring various development opportunities and building a solid economic relationship. At the end of this summit, the “Istanbul Declaration on the Africa-Turkey Partnership” and the “Cooperation Framework for the Africa-Turkey Partnership” were adopted. These two documents form the basis of Turkey-Africa cooperation. Since then, this summit has been organized every four years alternately in Africa and Turkey. As a result of these summits, Turkish-African relations have seen unprecedented development. Turkey joined the African Development Bank in 2013 and thus became the 78th member state of the African Development Bank. According to Turkish Ministry of Foreign Affairs, Turkey has been making an annual financial contribution of 1 million US dollars to the African union since 2009.(9+10)

Economic exchanges have risen to over 170 billion dollars since 2009. Turkish exports to the continent have reached 121 billion dollars while its imports are at the level of 58 billion dollars. Today Turkish investments are clearly visible in Africa. In a matter of a few years, Turkey has managed to establish itself as a competitor to the Western powers (France + UK) already present in Africa due to colonization.

The Turkey’s flag (THY)carrier flies to 56 destinations in Africa, second only to Ethiopian Airlines and first in terms of cargo services which is in competition with other International Carriers.

have made it a major “Soft- Power” country with lots to offer to Africa weather Economic, Political, Technological know-how, trade , investments, Humanitarian services, civil socities , Health, Education and Humn services as well as Military and security sector to All African Partners.

Turkish Trade and Investments with Africa since 2002.

All three suspects have been found guilty on Wednesday. It is clear that racism infected every aspect of the...
Read more

All three suspects have been found guilty on Wednesday....
Read more

‘Political terror’ists galore! Take a look at prices in the US and Europe… The 2008 crisis will be child’s play compared to what’s going...

The 2008 global economic crisis had struck the West,...
Read more
Horn Of Africa

A Fairer World is Possible: A Proposed Model for a United Nations Reform

"IT IS NEITHER MORAL NOR FAIR FOR JUST GIVE...
Read more

All three suspects have been found guilty on Wednesday. It is clear that racism...
Read more