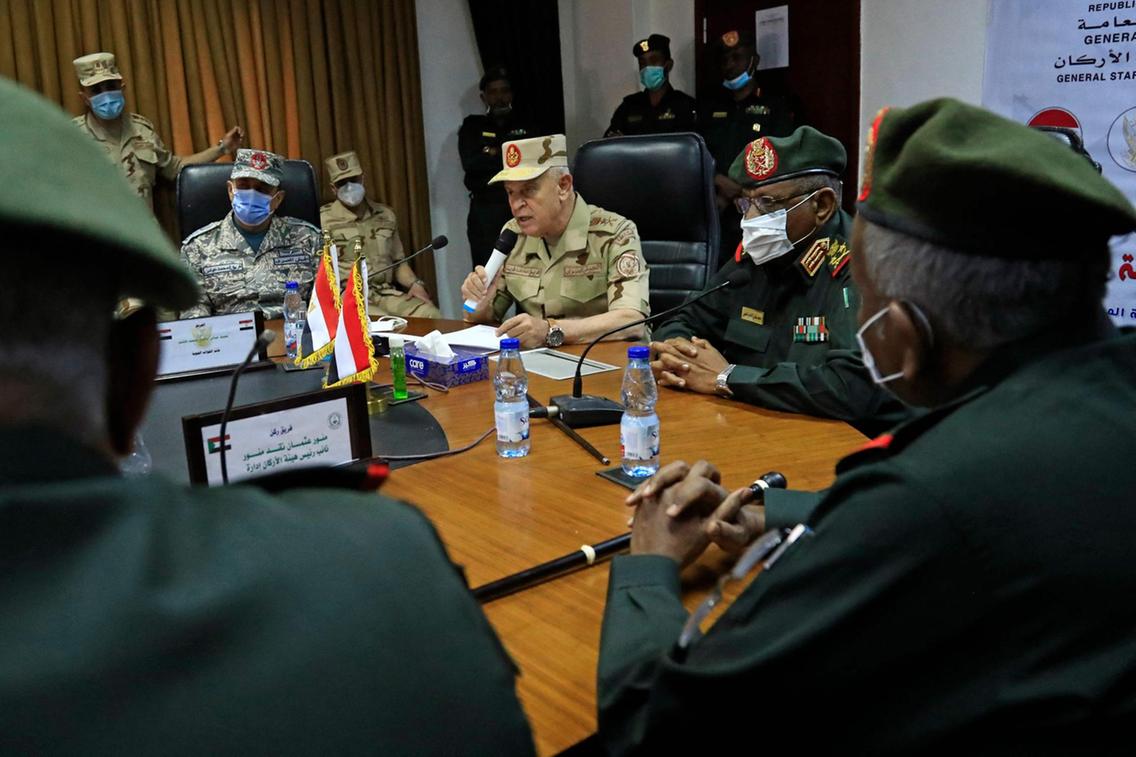 Egypt and Sudan on Tuesday signed a defence co-operation pact, sending Ethiopia a stern warning over what the two allies see as its intransigence on a border dispute with Khartoum and talks over Addis Ababa’s construction of a massive Nile dam.

Signed in Khartoum by the Sudanese and Egyptian chiefs of staff, the pact crowns months of increasingly closer relations between the militaries of the two countries, including a series of joint war games and high-level visits.

It came as Sudan’s Foreign Minister Mariam Al Mahdi met with her Egyptian counterpart in Cairo on Tuesday, when the pair blamed Ethiopia for stalled talks on the dam project and urged bringing in international parties into the talks to make progress.

Cairo’s backing for Sudan should come as boon for the Sudanese military, which has been involved in a series of increasingly provocative tit-for-tat incidents on the border with Ethiopia.

“We thank our brothers from the Egyptian armed forces for their good intentions, generous assistance and their strong support to overcome the present difficulties,” Sudan’s chief of staff, General Mohamed Othman Al Hussein, told the signing ceremony.

Also speaking at the ceremony, his Egyptian counterpart, General Mohammed Farid Hegazy, said little of the content of the joint defence pact but spoke at length about military and security co-operation between the two countries, including intelligence gathering and of the overlap of their national security.

He also reassured the Sudanese in crystal clear language that Egypt would not hesitate to quickly come to Sudan’s aid if needed.

“The resources, strong will and resolve are there to implement what we have agreed on to counter any emergency situations,” he said. “Egypt is ready to meet Sudan’s requests in all fields, including armament, joint training, technical support and securing joint borders,” he added, citing what he called the “gravity of dangers surrounding us.”

The comments by the two generals appear to go beyond rhetoric given the gravity and intractableness of the Sudan-Ethiopia border dispute and the quarrel over the Grand Ethiopian Renaissance Dam, or GERD.

At the talks in Cairo, Ms Al Mahdi and Sameh Shoukry, her Egyptian counterpart, urged more outside involvement in the GERD talks.

The pair urged the UN, EU and US to form a framework with the African Union chair – currently the Democratic Republic of Congo – to help restart and mediate the talks as a quartet.

The Sudanese-Ethiopian border dispute has seen forces from both sides engage in several deadly clashes after the Sudanese military moved late last year to wrest back control of farmlands settled by members of Ethiopia’s Amhara ethnic group since the 1950s.

The two countries have since engaged in sabre rattling, accusing each other of border incursions, targeting civilians and massing up troops on the border.

Ethiopia has also claimed the Sudanese military was stoking the dispute for the benefit of Egypt, also at sharp odds with Addis Ababa over the likelihood that the GERD would deeply cut its vital share of the Nile waters.

Sudan has maintained that Ethiopia’s failure to share data on the operation of the dam, located less than 20 kilometres from the border, puts at risk the lives of 20 million Sudanese. It worries about deadly flooding and the possibility the dam could disrupt the work of its smaller power-generating dams on the Blue Nile.

Egypt has said the dam presents an existential issue and it would not stand idly by if Ethiopia tries to impose a de facto situation.

Ethiopia was expected to make good on its often-repeated threat to go ahead with a second filling of the dam in July, regardless of whether an agreement was reached with downstream Egypt and Sudan on the operation of the GERD.

The filling, involving about 13 billion cubic meters of water, could significantly set back efforts to find a peaceful resolution to the GERD dispute, handing Addis Ababa an unassailably strong position in future negotiations and again raising the prospect of a war that could destabilise the entire region.

While Sudan shares a border with Ethiopia, Egypt does not, a fact that would dictate the nature of any military involvement by the Egyptians in a future conflict.

But President El Sisi has been procuring billions of dollars’ worth of cutting-edge weapons over the past six years, some of which give his military the capability of operating beyond its borders.

A general-turned-president, Mr El Sisi has said that negotiations was the preferred method of resolving the dispute over the dam, but he never categorically ruled out military action.

Share
Facebook
Twitter
WhatsApp
Linkedin
Email
Previous articleSimmering rage and child poverty as Syrians queue for bread
Next articleDanger, discord and dilemma: A diary of life aboard a migrant rescue ship in the Mediterranean Sea