On 6 October, when Samuel Paty, a popular history and geography teacher at a school in a quiet Paris suburb, presented a copy of the cartoons of the prophet Muhammad that provoked the attack on Charlie Hebdo magazine five years ago, he self-evidently had no idea of the tragic consequence for his own life, French society or France’s relations with the Islamic world. What was intended as a classroom exploration of the freedom of thought has turned into a mini-clash of civilisations.

Ten days later, Paty was killed, allegedly by a Russian-born teenager of Chechen heritage, sending an electric shock into France’s long debate about secularism, or laïcité. The French president, Emmanuel Macron, responded by saying France would not “renounce the caricatures”.

Since then Macron has been described as mentally ill by the Turkish president, Recep Tayyip Erdoğan; his ambassador to Pakistan has been summoned to condemn incitement of Islamophobia; and from Sana’a to Riyadh he has become a one-man axis of evil. French products are the subject of a boycott. Le Train Bleu restaurant in Doha, “a quintessential Parisian dining experience” in Qatar, is for instance hurriedly re-sourcing its products. 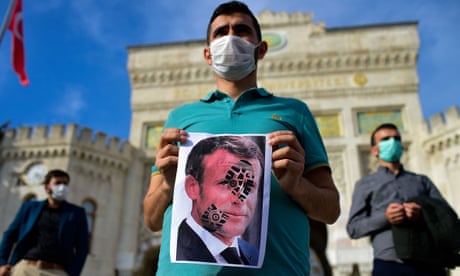 It would be easy to think that Macron, facing record Covid infections, might look at his in-tray and back off. But he appears to have done the opposite, ringing the Russian president, Vladimir Putin, with the Chechen origins of Paty’s alleged assailant in mind, to urge him to redouble Russia’s efforts to cooperate on terrorism. Macron has long sought a reset with Moscow by joining forces against terrorism. The call in some accounts took the form of a lecture, and in others an appeal to cooperate more closely in a common cause.

Either way this is not a fight Macron is likely to abandon. Domestically, he faces the first round of the French presidential elections in April 2022, and his challenge will come from the security-minded right, either the centre-right Les Républicains or the far-right Marine Le Pen, with whom he is neck and neck in the polls. His net disapproval rating as president is -24%.

His calculation will be that so long as he makes the final round, the left as before has nowhere else to go. Being tough on Islamist separatism, and paying a price globally, hardly wounds him with waverers on the right.

But to diminish his conflict with extremism into a narrow calculation of personal political advantage is to misunderstand his intellectual journey on secularism in office, and the way in which the issue is central to his foreign policy outlook including his attitude to Turkey, Russia, Nato and the Middle East.

By raising the stakes, and keeping them high, Macron is also trying to make others recognise they cannot stay neutral.

A protest in Istanbul on Sunday, the day after the Turkish president, Recep Tayyip Erdoğan, described Macron as mentally ill. Photograph: Emrah Gürel/AP

Macron after all had tackled the debate about Islamist extremism before Paty’s death in his speech on 2 October on secularism – an hour-long address in which he attempted to be nuanced on how to integrate Islam and French secularism. It contained a number of proposals to regulate imams and mosques.

In the passage has proved most provocative in Turkey, he said: “Islam is a religion that is experiencing a crisis across the world,” in reference to Islamic State jihadism and also Wahhabism, the Saudi extremist ideology, and Salafism. “We don’t believe in political Islam that is not compatible with stability and peace in the world.”

Islamic separatism, which Macron describes as a deviation of Islam, is “a conscious, theorised, politico-religious project, which is materialised by repeated discrepancies with the values of the republic, which often results in the creation of a counter-society and whose manifestations are the dropping out of school of children, the development of sports, cultural and communal practices which are the pretext for the teaching of principles which do not conform to the laws of the republic”.

There were also balancing passages about the state as guarantor of the freedom of religion, economic disenfranchisement, and the French colonial legacy.

A complex speech such as this does not take long to be distorted and become a source of grievance abroad, especially in Turkey, since as many as half of the imams in France are Turkish.

But more importantly, Turkey is already in a number of disputes with France.

These disputes – over Syria, Libya, Nato, gas exploration in the eastern Mediterranean and Armenia – each have their own context and specifics, but they all stem from a French suspicion of Erdoğan’s ambitions to lead a revived Sunni Islam.

In Syria, Macron objects to the Turkish attacks on the Kurdish YPG militia, France’s allies in the war against Isis. In Libya, his initial objection to Islamist influence in Tripoli’s Government of National Accord has morphed into a conflict with Turkey after Ankara sprang to the GNA’s aid. He warns that the Nato alliance may become brain dead since Turkey, a fellow member, is ambivalent about the defence of western values. In the Mediterranean, he equates Greek interests with those of Europe, leaving Germany to mediate. He more and more openly sides with Armenia.

Many Europeans worry about Macron’s somewhat Gaullist, or France-first, approach. Bruno Tertrais at the French Foundation for Strategic Research argues: “France itself does not always consult its allies or seek their support before taking diplomatic initiatives. It barely did so in Libya and didn’t do so at all with regard to its Russia reset. Perhaps if Macron had nurtured ties with France’s eastern European Nato allies and EU members, he would have gained more early support for his stance against Turkey and more trust for his Russia diplomacy.”

The French calculation is that Erdoğan will succumb to pressure. The Turkish lira is at a new low, and there are only so many fronts on which an autocratic leader can fight. But Erdoğan will draw his own strength from the condemnations of Macron across the Arab world. On Monday, he explicitly joined the call for a boycott of French goods, and claimed: “It becomes more and more difficult to be a Muslim and live an Islamic lifestyle in western countries.” This has a long way to run.

People also ask Is federal system suitable for Somalia? Since 2004, the country has moved toward a federal system, not because...
Read more

The latest mass shooter in Buffalo, New York was clearly a racist, and identified with Ukrainian and other neo-Nazis....
Read more

Corporate media and the US state depict Cuba as an isolated and friendless country. In fact, it is the...
Read more

How Global McCarthyism Shaped the World

Military coups are a CIA tool used to control the Global South and ensure U.S. hegemony in many parts of...
Read more

The War in Ukraine. Scott Ritter’s Switcheroo: “Why I Radically Changed My Overall Assessment”

All Global Research articles can be read in 51 languages by activating the “Translate Website” drop down menu on the top...
Read more

Corporate media and the US state depict Cuba as...
Read more
North America

People also ask Is federal system suitable for Somalia? Since 2004, the country has moved toward...
Read more

The latest mass shooter in Buffalo, New York was clearly a racist, and identified...
Read more

Corporate media and the US state depict Cuba as an isolated and friendless country....
Read more