Not much room for negotiations with Armenia 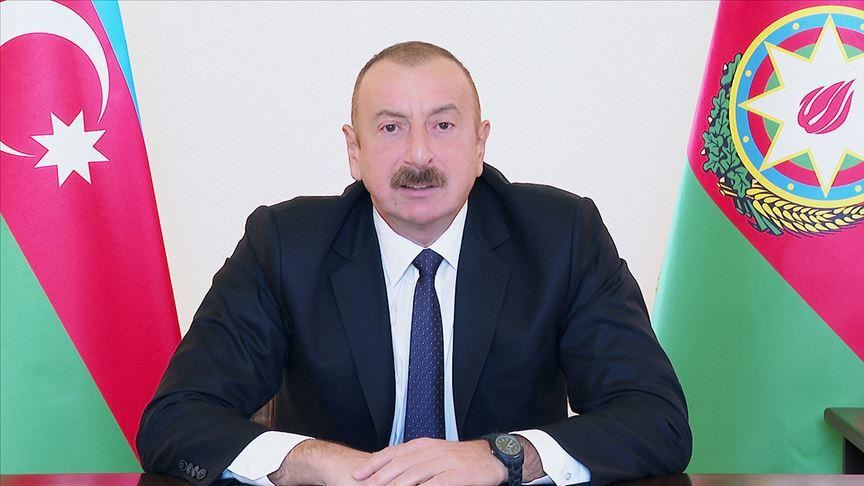 Amid Armenia’s aggressive rhetoric and attacks on the Upper Karabakh region, “there is not much room for negotiation,” Azerbaijan’s president has said in an interview.

In an interview with Nikkei Asia released on Thursday, Ilham Aliyev answered questions about ongoing hostilities between Azerbaijan and Armenia, as well as other related issues.

Throughout the interview, Aliyev addressed topics including trilateral talks planned to be held in the US, short-lived truces with Yerevan, Baku’s expectations from the negotiations, Turkey’s role in the Caucasus region and the natural gas lines from the country.

Aliyev underlined that Azerbaijan was ready for the talks in Washington slated for Friday, adding that his country’s main objective at the discussions would be to “find out whether the Armenian leadership is ready to liberate our territories or not, and if ready, then when?”

However remote, he said he would be open to a trilateral summit with Armenia’s Prime Minister Nikol Pashinyan if progress is made in Washington in the upcoming meeting between the two countries’ foreign ministers.

“With this Armenian government, unfortunately, the prospect for a peaceful settlement is very remote. […] Counterproductive and provocative statements and actions on behalf of the Armenian leadership make the negotiations senseless,” Aliyev said. “Therefore, we had to prove to the Armenian government that they cannot afford any longer to make aggressive steps without any punishment. We are punishing them on the ground. Armenia is suffering a very bitter defeat on the battlefield.”

Citing attacks by Armenia as the reason for the failure of two recent cease-fire agreements, he added: “I have always said a cease-fire cannot be achieved unilaterally. If we are attacked, we must not only defend ourselves but also launch a counter-attack.”

On the durability of a future truce, Aliyev said this would hinge on whether Yerevan would commit to withdrawing from Azerbaijani territories under its occupation.

“If Armenia commits to negotiations and with a strong commitment to liberate territories which they have so far not announced, then this cease-fire will be long term because we want to solve it peacefully.”

Emphasizing that all occupied Azerbaijani territories must be liberated and returned to Baku, Aliyev added that refugees and people that had been displaced from Nagorno-Karabakh must be able to return to the region.

Aliyev told Nikkei that Azerbaijan wanted Turkey to have a more active role in the negotiation process, as well as a greater say in Caucasus affairs.

“It depends on the political agenda of Turkey. I cannot speak on behalf of Turkey. But what I want to say, is that, of course, we are always the strongest supporter of Turkish active involvement in regional issues.”

“I think Turkey is the only country that has a border with the three Caucasian countries. No other country has borders with three of them, so of course, Turkey should be actively involved and Turkey is already involved and we strongly support it,” he added.

Asked whether he had any concerns about the security of natural gas pipelines running from Azerbaijan westwards, as well as that of the Trans Adriatic Pipeline (TAP), Aliyev underlined that everything would continue as planned.

With only a couple of weeks left until the official opening of TAP between Baku and Europe, he asserted that Azerbaijan had no accidents since 2006 related to its energy lines.

“Our pipelines in our territory are duly protected. But of course, we heard threats from official Armenian representatives that they will attack our pipelines and the Sangachal Terminal which is very important for oil and gas transportation,” he said.

However, he added that if Armenia did attack Azerbaijani gas pipelines, it would regret it.

“They will be punished by us severely. And also, those countries, which today provide part of the energy security from Azerbaijan, what will be the reactions of those countries? Billions of dollars have been invested in these pipelines, [such as] all the leading international banks, like the World Bank, European Bank for Reconstruction and Development, Asian Development Bank, European Investment Bank, and other banks and investors.”

In total, about 20% of Azerbaijan’s territory — including Nagorno-Karabakh and seven adjacent regions — has been under Armenia’s illegal occupation for nearly three decades.

The Organization for Security and Co-operation in Europe (OSCE) Minsk Group — co-chaired by France, Russia and the US — was formed in 1992 to find a peaceful solution to the conflict, but to no avail. A cease-fire, however, was agreed to in 1994.

World powers, including Russia, France, and the US, have called for a new sustainable cease-fire. Turkey, meanwhile, has supported Baku’s right to self-defense and demanded the withdrawal of Armenia’s occupying forces.

The U.S. military secretly deployed a small number of trainers and advisers to Somalia in October, the first time...
Read more

On December 12, Russia celebrates an official holiday - Constitution Day. The author believes that it is in the Constitution...
Read more

On the eve of the NATO summit focusing on war against Russia in Ukraine as well as confronting China,...
Read more

In remarks at the NATO Summit in Madrid, Spain, US President Joe Biden announced a sweeping increase in US...
Read more

On the eve of the NATO summit focusing on...
Read more
News of Africa

The U.S. military secretly deployed a small number of trainers and advisers to Somalia...
Read more