Fight over the Mediterranean: France’s Proxy War and the Budding Turkish-Russian Alliance 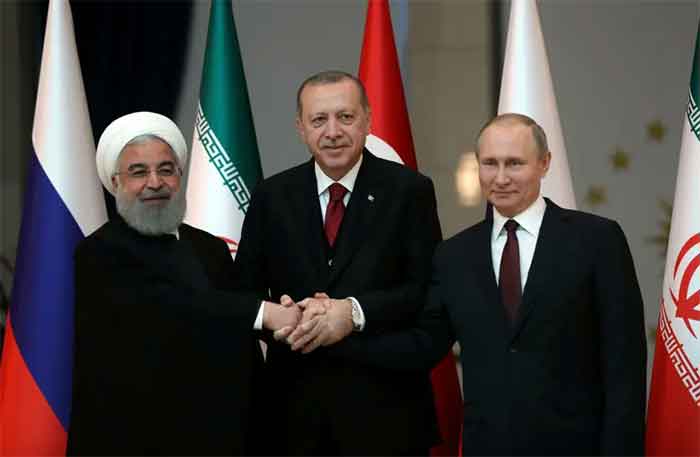 Overwhelmed by uncontrollable circumstances, the Greek government is bracing for another financial crisis that promises to be as terrible as the last one in 2015.

Prime Minister, Kyriakos Mitsotakis, announced, on September 12, that Athens has made a “robust” arms deal that will “reinforce the armed forces” and create a “national shield”.

However, beyond Mitsotakis’ mask of confidence, there is a nightmare brewing that is likely to haunt Greece for years to come. Five years ago, when Athens defaulted on its debt,  largely to European countries and institutions, France and Germany rushed to further strangle the humbled country by selling it yet more military hardware.

While the Greek government is presenting the move as a show of force in case of a future military conflict with neighboring Turkey, the French arms will intensify Greece’s vulnerability to French political diktats, now and in the future.

This is part of a larger pattern for France. French President, Emmanuel Macron, is, again, assuming the role of savior. Lately, he has taken on the role of rebuilding devastated Beirut following the massive explosion in August. In return, he expects – in fact, demands – political acquiescence from all of Lebanon’s political forces.

The crisis in Greece, however, is different. The Turkish-Greek East Mediterranean conflict is multifaceted as it involves many regional players, all vying for the same prize: some dividends in the massive deposits of newly discovered natural gas. While the conflict is presented as a continuation of the protracted hostilities between Turkey and Greece, in actuality, the latter is but a small facet of a new great game, the outcome of which could change the dynamics in the Mediterranean altogether.

While NATO is falling apart at the seams, due partly to the current US administration’s isolationist policies, European countries, like France and Italy, are acting independently from the once-unified Western military alliance.

Europe is losing its once strategically dominant position in the Mediterranean region. After years of investing in the decade-long Libyan conflict, European countries are likely to go home empty-handed.

For years, France has backed the Eastern-based forces of Libyan General, Khalifa Haftar, while Italy supported the Government of National Accord (GNA) in the West. The two NATO members, openly clashing politically, had hoped that the outcome of the Libyan war would provide them with much military, political and economic leverage.

Nevertheless, the news emerging from the region is clearly contrary, in that Turkey and Russia, which staked their claims over Libya only recently, are the ones who are now controlling the fate of this country. Not only are Ankara and Moscow the main power brokers in Libya – Russia supporting Haftar, while Istanbul backing the GNA – it is likely that they will shape Libya’s future, as well.  In their second rounds of negotiations in Ankara on September 16, the two countries have endorsed a ceasefire in Libya as part of a political process that should eventually stabilize the warring country.

The irony is that, until fairly recent, there was discord between Turkey and Russia. The conflict in Syria had reached a point where war in 2015 seemed imminent. This has changed as both countries saw an unprecedented opportunity arising from the relative absence of Washington as a direct player in the region’s conflicts, coupled with European/NATO disunity and internal conflict.

With time, more opportunities arose in Libya and, eventually, in the Eastern Mediterranean. When France and Italy showed enthusiasm in an emerging alliance between Israel, Greece and Cyprus around the EastMed gas pipeline project, Turkey swooped in to counter-balance this with an alliance of its own. In November 2019, Turkey and Libya’s GNA signed a Memorandum of Understanding that expanded Turkey’s areas of influence in the Mediterranean and forced France to contend with yet another challenge to its leadership in the region.

Moreover, emboldened Turkey widened its search for natural gas in the Mediterranean to cover a massive area that extends from the Turkish southern coast to Libya’s north-east coast. With NATO being unable to present a unified front, France advanced alone, hoping to sustain a geopolitical status quo that has governed the Mediterranean for decades.

That status quo is no longer sustainable as a new political contract is sure to be written, especially as the nature of the Turkish-Russian alliance is becoming clearer and promises to be a lasting one.

The mutual interests between Turkey and Russia are likely to culminate into an actual alliance should their ongoing negotiations pay lasting dividends. On the other side of that possible coalition, there are reluctant and fractious European powers, led by self-serving France, whose strategic vision has suffered a major blow in Libya as it did in Syria, years earlier.

Russian Foreign Minister, Sergey Lavrov, is now leading Russian diplomacy to find a non-military resolution to the Turkish-Greek conflict. This, in itself, is an indication of Russia’s growing prowess in a region that, until very recently, was dominated solely by NATO.

Ramzy Baroud is a journalist and the Editor of The Palestine Chronicle. He is the author of five books. His latest is “These Chains Will Be Broken: Palestinian Stories of Struggle and Defiance in Israeli Prisons” (Clarity Press, Atlanta). Dr. Baroud is a Non-resident Senior Research Fellow at the Center for Islam and Global Affairs (CIGA), Istanbul Zaim University. His website is www.ramzybaroud.net

The U.S. military secretly deployed a small number of trainers and advisers to Somalia in October, the first time...
Read more

On December 12, Russia celebrates an official holiday - Constitution Day. The author believes that it is in the Constitution...
Read more

On the eve of the NATO summit focusing on war against Russia in Ukraine as well as confronting China,...
Read more

In remarks at the NATO Summit in Madrid, Spain, US President Joe Biden announced a sweeping increase in US...
Read more

In remarks at the NATO Summit in Madrid, Spain,...
Read more
News By Country

Afghanistan earthquake exposes disaster caused by decades of US occupation

A 6.1-magnitude earthquake in a remote area of Afghanistan...
Read more

The U.S. military secretly deployed a small number of trainers and advisers to Somalia...
Read more