By AL JAZEERA AND NEWS AGENCIES 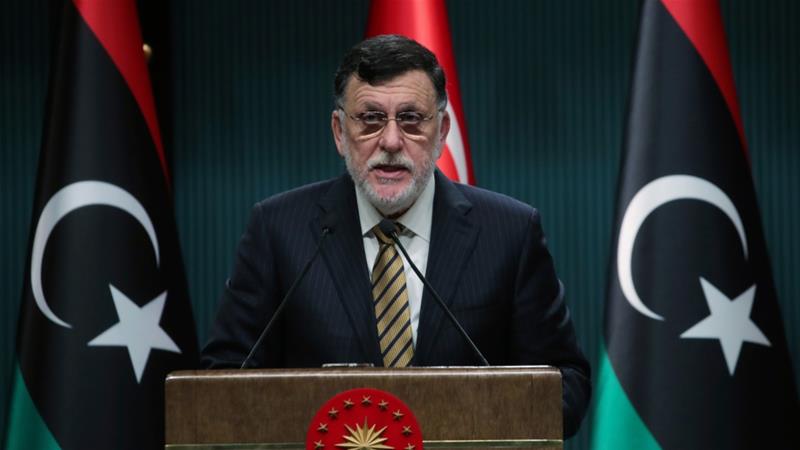 Fayez al-Sarraj has headed the GNA since it was formed in 2015 as a result of a UN-backed political agreement aimed at uniting and stabilising Libya after Muammar Gaddafi’s removal [File: Turkish Presidency via AP]

Fayez al-Sarraj, the head of Libya’s internationally-recognised government, has said he wants to quit by the end of October and hand over power to a new executive authority as efforts to find a political solution to the country’s years-long conflict gather pace.

In a brief televised speech on Wednesday, al-Sarraj said United Nations-brokered talks between the country’s rival factions have led to a “new preparatory phase” to unify Libyan institutions and prepare for parliamentary and presidential elections.

“I announce to all my sincere wish to cede my functions to the next administration before the end of October at the latest,” he declared from the capital, Tripoli.

Al-Sarraj is head of the Tripoli-based Government of National Accord (GNA), while eastern Libya and much of the south is controlled by renegade military commander Khalifa Haftar’s Libyan National Army (LNA).

Haftar’s LNA – which is backed by the United Arab Emirates, Egypt and Russia – launched an offensive in April 2019 trying to capture Tripoli from al-Sarraj’s government. But the campaign collapsed in June when the Turkish-backed GNA forces gained the upper hand and drove the LNA from the outskirts of the capital and other western towns, with the front lines now solidified near the central city of Sirte.

Under heavy international pressure, delegates from the rival camps met earlier this month and agreed on a preliminary deal that aims to guide the country towards elections within 18 months and demilitarise Sirte.

The coastal ity, which is controlled by Haftar, is the gateway to Libya’s major oil fields and export terminals, also held by the 76-year-old.

The LNA has blockaded energy exports since January, depriving the Libyan state of its main source of revenue, worsening living standards and contributing to protests in cities controlled by both sides.

In Tripoli, the protests fuelled tensions between al-Sarraj and the influential Interior Minister Fathi Bashagha, whom he briefly suspended last month before restoring him to his post.

Talks are expected to resume soon in Geneva.

“This is effectively the starting gun for a new round of manoeuvring for what comes next,” Tarek Megerisi, a policy fellow at the European Council on Foreign Relations, told the Reuters News Agency, referring to al-Serraj’s plans to step down.

“Ultimately it’ll leave the GNA as an entity, and western Libya, a bit degraded,” he added.

Al-Sarraj’s departure could lead to new infighting among other senior GNA figures, and between the armed groups from Tripoli and the interior minister’s coastal city of Misrata that wield control on the ground.

“The militia issue will be more vivid,” said Jalel Harchaoui, a research fellow at the Clingendael Institute.

Al-Sarraj has headed the GNA since it was formed in 2015 as a result of a UN-backed political agreement aimed at uniting and stabilising Libya after the chaos that followed the 2011 uprising that removed Muammar Gaddafi.

Despite the failings and weakness of the government he led, al-Sarraj has been seen as a moderate with whom parts of the eastern faction and their foreign allies, as well as other international players, were comfortable dealing.

Al-Sarraj, who arrived in Tripoli on Wednesday after a visit to his close ally Turkey, urged negotiators to quickly name the new administration to “secure a peaceful and smooth transition”.

Separately, Turkish Foreign Minister Mevlut Cavusoglu on Thursday said Turkey and Russia were close to reaching an agreement on a ceasefire and a political process to end the long-running conflict following the latest round of talks between the two power brokers in Ankara.

“That political process needs to renew the institutions that exist and, at the same time, to move for elections in an acceptable delay,” he said. “There are signs of hope.”

Guterres said also there are “promising contacts” to agree on a lasting ceasefire rather than the currently existed military standstill.