Threat to Somalia’s National Security and Existence as a Nation State. The Right to Self-Defense 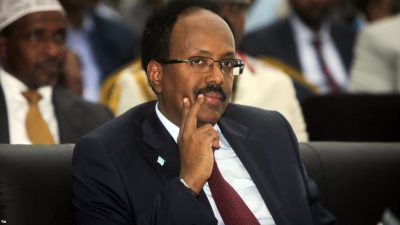 On November 15, 2019 the UN security Council extended the illegal, immoral and racist 27 years of  arms sanctions on Somalia which was in effect since 1992.

Through a recorded vote, the Security Council today renewed the mandate of the Panel of Experts for the sanctions regime on Somalia until 15 December 2020, while also extending exemptions for the arms embargo and enforcement authorizations for the ban on illicit trade.

“Adopting resolution 2498 (2019) through a vote of 12 in favour to none against, with 3 abstentions (China, Equatorial Guinea, Russian Federation), the Council renewed for one year the partial lifting of the arms embargo on Somali security forces and exemptions related to humanitarian aid, as well as the authorization for maritime interdiction of arms imports and charcoal exports that could benefit Al‑Shabaab and other armed groups.

In its restrictions on weapons for the security forces, the Council decided that the delivery to Somali security forces of heavy weapons listed in the resolution’s Annex A requires advance approval by the Committee pursuant to resolution 751 (1992), while light weapons listed in its Annex B require advance notification.  Noting with concern reports that States were not adequately following such notification procedures, the Council reminded States of their obligations in that regard.

Somalia is located in the Horn of Africa region with a 2019 population estimated at 17.44million (HornCSIS.org) estimates done August 27, 2019. It’s the unity of Italian and British Somaliland’s in 26 June 1960 and July 1st, 1960 respectively to form the united Somali Republic.

The country is rapidly expanding with almost 3% annual population growth and a high fertility rate of 6.26 children per woman, which is the 4th highest in the world. Somalia’s population ranks 73rd in the world. Somalia is rich in natural and mineral resources from abundant marine resources off the Somali coast – the longest coastal line in Africa; rich in both rare and strategic mineral resources; Fertile soil for  agricultural production  between the two main rivers of Jubba & shabelle as the  main bread- basket in conjunction with  potential production of animal resources.

Somalia has been an independent, united, sovereign and geostrategtically very significant  nation from1960-69 with civilian government and a socialist military administration from 1969-91  Until a western influenced, created and  founded hyper-warfare engulfed the country starting the 1980’s with tribally – based rebel movements mostly based in Marxist Ethiopia and UAE.

The civil war of 1991- 2000 completely destroyed the country physically, socially, economically, with high toll in human loss. The ousting of Mohamed Siad Barre in 1991 sparks a decades-long civil war between rival clan warlords and the disintegration of central authority and pitted one tribe against another Former British Somaliland declares unilateral independence.

The Transitional National + Federal Governments of Somalia from 2000-2019

By 2000 Somali political figures and militia leaders got together a peace conference in Arta, a small town outside of Djibouti city, with the election of 245 members of the parliament for Transitional National Government (TNG) and its first President Abdiqassem Salaad Hassasn.  The Transitional National Government of Somalia was the first Somali national government fully recognized by the world community from the AU, United Nations and the League of Arab States. By the end of the TNG term in 2003 there were unease among the political leadership and the general public to where the future of Somali peace, peace-building and sustainable reconciliation.

Foreign interventions and meddling of Somalia by American and European interests using  the fake Global war on terror (GWOT)  via neibouring countries of Ethiopia and Kenya has completely destabilized and destroyed the country from 2003- 2009  thus, using UN security council arms sanctions and foreign military personal and PMC funded by both US/EU  in order to control and subjugate Somalia under their geo-strategic, economic and political interests since 1991.

Therefore, it seems  with 27 years if UNSC arms sanctions to be another form of Neocolonialism and Occupation of Somalia by certain international actors i.e. US/EU /UN  are not really interested fundamentally in finding a sustainable security solutions for Somalia  and those employing and using the United Nations security Council arms sanctions to keep Somalia a trusteeship of United Nations  through decades long arms sanctions which prevent  independent, sovereign Somalia Nation- state the right to Protection of its citizens, Control and security of its territorial borders land, sea and Air space.

The election of 2017 of President Mohamed Abdullahi Mohamed, known as Farmajo, Somali nationalist  and centrist who strongly believes in rehabilitating and re-building the Somali National Army, Police, intelligence, coast and Border Guards have lifted the Somali psychic and  herald for dreaming a better tomorrow. He was a popular prime minister during his brief tenure in 2010 and 2011, with a reputation for making sure soldiers were paid their monthly salaries. And with state finances allegedly being diverted to fund an expensively corrupt electoral process they will be hoping to jump to the front of the queue.

Together with his new Prime Minister Hassan Ali Kheyre and cabinet they set their immediate  national goal of re-building Somali security forces and apparatus form 2400 – to 45000 military and police personal across the country in less than 4 years with the assistance of friendly nations of Turkey, Egypt, and more recently Russia.

Strengthening the national army and police force – in the new federal state that Somalia has become – Their National Goal for preserving, protecting and Preventing Somali security and Unity.

Today, Somalia desperately needs an effective, professional, well equipped and national army to stabilize the country and protect its citizens and country from one of the world’s deadliest militant groups, al-Shabaab and foreign exploitation, occupation, balkanization and pillaging of Somali resources and affairs.

The Somali Federal Government and its 17 Million people’s cannot depend on their Sovereignty, territorial integrity and national security. Somalia needs the Lifting of these illegal, immoral, unsustainable arms sanctions immediately since these sanctions are detrimental to Somali security, economic, political, territorial integrity and soverngity.

As Somali UN amabassador Abukar Dahir Osman called for the lifting of outdated sanctions imposed against his country. The measures fail to take into account Somalia’s new positive reality and are not properly aligned with the Federal Government’s efforts to rebuild a unified, equipped Somali National Army (SNA) capable of safeguarding its own people and territory.  Affirming that Al‑Shabaab remains a serious threat to the peace and stability of Somalia and the wider region, he said that the sanctions lack clearly defined benchmarks in that context.

As well, the millions that the international community has spent on monitoring teams and the Panel of Experts for more than a decade “will not properly address the root causes of the problem”, he continued. Somalia’s partners should instead invest in improving the Government’s capacity in border control in order to curb the flow of foreign fighters and illegal weapons. Noting that the military base in Berbera is in clear violation of Somalia’s sovereignty and territorial integrity, he stressed that his country will not tolerate the naming of Somali individuals and business enterprises by the Panel of Experts without a reasonable standard of proof.

“Somalia’s representative, encouraging the Council to see the current challenges in the context of his country have continued upward trajectory and steady path towards the rebuilding process, said steps are being taken to improve relations among the states, combat sexual violence, enhance security and tackle humanitarian challenges.  “A State can only be as strong as the people within it,” he said, noting that efforts are also under way to ensure women’s participation in all aspects of life and to establish free, fair and credible elections.

It has made significant progress in the political, economic and social spheres.  The backing of countries in the region and support from the United Nations, IGAD and the African Union has been essential to achieving peace and stability and countering the political stalemate. Good relations between different levels of government remain essential to enhancing security, he emphasized, calling on parties to speed up discussions on key issues.

These are the 11 UN Security Council imposed arms Embargo since 1992:

2) February 2007 the embargo was amended to allow arms supplies to Somali Government Forces.

3) In January 1992 Security Council Resolution 733 established an arms embargo on Somalia in reaction to the ongoing conflict and deteriorating humanitarian situation. This Resolution was unanimously adopted.

4) In June 2001 Security Council Resolution 1356 allowed for exemptions to the embargo for supplies of non-lethal military equipment for use in humanitarian operations.

5) In July 2002 Security Council Resolution 1425 clarified the scope of the arms embargo, making clear that it prohibited the financing of arms acquisitions as well as the direct or indirect sale or supply of technical advice or military training.

6) In December 2006 Security Council Resolution 1725 partially lifted the UN arms embargo on Somalia. The resolution authorized the Intergovernmental Authority for Development (IGAD) and African Union member States to deploy a regional intervention force to protect Somalia’s Transitional Federal Government (TFG) and to arm and train the TFG security forces. The resolution maintains the existing embargo but states that its provisions do not apply to transfers of military equipment, technical training and assistance intended for the regional intervention force.

7) In February 2007 Security Council Resolution 1744 limited the embargo to non-state actors. It allowed the supply of weapons and military equipment intended solely for the purpose of helping develop Somali security sector institutions if the sanctions committee on Somalia had been notified in advance and on a case by case basis and if the SC had not made a negative decision within five working days after the notification.

10) In March 2013 Security Council Resolution 2093 amended the restrictions and procedures related to arms supplies to the Somali  Government while maintaining the embargo on arms supplies to non-state actors in the country. Security Council Resolution 2111 from July 2013 further clarified the decisions of Resolution 2093. Under the resolutions, for a one-year period, until 6 March 2014, ‘(…) the arms embargo on Somalia shall not apply to deliveries of weapons, military equipment, assistance or training intended solely for the development of the Security Forces of the Federal Government of Somalia, and to provide security for the Somali people (…)’.

3)  In 2018, UNentities in Somalia had a combined total budget of over US$677million across all UNSF Strategic Priorities, of which over US$458 million was delivered.

Sweden could not expect Turkey’s support for its Nato...
Read more