Israel A Beachhead in the Middle East by Stephen Gowans, reviewed by Bruce Katz

Following the Armistice which marked the end of the First World War, British Prime Minister Lloyd-George and French President Clémenceau held a private meeting during which Clémenceau asked Lloyd-George: ‘What does Great Britain want?’ The answer came swiftly: ‘

‘What else?’ asked Clémenceau.

Thus was confirmed the Anglo-French plan to carve up the Middle East by supplanting the Ottoman Empire, as first detailed in the clandestine Sykes-Picot negotiations concerning the establishment of British and French protectorates in the Middle East. What was the significance of Palestine for Great Britain? London had its eye on Palestine and Jordan, as extensions of the band of territory the Empire controlled from the southern tip of Africa to Egypt in the north. (Gowans, page 60).

In his newly published book, Israel: A Beachhead in the Middle East, author Stephen Gowans traces with painstaking detail the process by which the Western colonial powers – primarily Great Britain and France, and subsequently the United States – set about ensuring their control of Middle East oil reserves through ‘regime change,’ the creation of new ‘nations’ (Saudi Arabia, Jordan, Lebanon) carved out of Syria, establishing in them vassal rulers to ‘oversee’ their populations for the benefit of the colonial powers, and using the Zionist movement to create within Palestine a state which would serve as the Western policeman whose role would be to suppress pan-Arab nationalist movements that preached ‘Arab oil for the Arabs’ in defiance of Western ‘interests,’ then and now. As Gowans states the case: 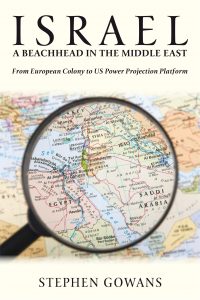 Pan-Arabism is an unlikely but enormously dangerous threat, not only to US control of the Middle East’s lucrative and strategically important oil reserves But to Western power on a global scale. . . A pan-Arab state, a United Arab States, if you will, would threaten Western claims to geo-political and economic supremacy. (page 74)

Gowans traces the development of British and subsequent U.S. relations with the Zionist movement and its emergence into the State of Israel in great detail. He shows how Israel fit into the Anglo-French and subsequent American juggernaut as the main spoke in a wheel designed to crush any Arab opposition to Western control over the Middle East’s energy resources. What is revealed with clarity delved from Gowans’ considerable scholarship is that Anglo-American relations with Israel have been from the outset symbiotic. In other words, Israel performs the functions it was set up to do from the Sykes-Picot machinations to the present in exchange for the unconditional support of Western nations for the Zionist colonization of Palestinian lands. Ergo, the tail does not wag the dog, despite appearances to the contrary. As Gowans points out in a reference to John Mearsheimer’s work, The Israel Lobby and U.S. Foreign Policy:

As powerful as AIPAC is, it is no match for the combined influence of corporate America and its financial arm – Wall Street . . . It would be absurd to believe that a lobby with a $60 million budget has an influence over US foreign policy that comes even close to the influence corporate America can – and does – bring to bear on Washington. (page 208)

(Nor for that matter does AIPAC swing as heavy a hammer as the political representatives of the 80 million Christian evangelical Americans who voted in a heavy majority for Donald Trump for president in 2016).

Gowans also outlines the relation which existed between certain anti-Semitic elements of the British and American economic and political elites and the Zionist project in Palestine. By the outset of the 20th century, Zionist leaders saw anti-Semitism as the pre-requisite for the realization of their colonial project. As Gowans  points out, Theodore Herzl believed that anti-Semitism was inherent to Christian society and in his earliest writings concluded that Europe’s Christian leaders and populations would become the Zionists’ objective allies in their willingness to expel their Jewish populations to Palestine as the means of settling the ’Jewish question.’

The depiction of some of the deeply anti-Semitic members of the Anglo-American economic and political elites may surprise some as these have been white-washed through the myths spun by much of the Western media over the years. One such personality is Winston Churchill who referred to ‘good Jews’ and ‘bad Jews’ depending on their political affiliations. Those who supported Western interests unflinchingly were ’good Jews’ but those corrupted by the values of Bolshevism were ‘bad Jews.’ (See pages 23-30)

Gowans points to the fact that a bevy of well-known, powerful and influential corporate and political leaders – among them ‘Winston Churchill, officials of Whitehall and the Quai D’Orsay, Alan Dulles, Henry Ford, Mark Sykes and others …’ (page 26) saw Jews on the political Left as a radical element of society heading the Bolshevik movement. Accordingly, Churchill saw Zionism, the right-wing nationalist movement, as a ‘bulwark against communism.’ (page 29)

Churchill juxtaposed the international Jew and its subset, the “terrorist Jew” (by which he meant the leading figures of the Bolshevik Revolution), with a group he considered altogether more commendable, the nationalist Jew, or Zionist who was taking advantage of the opportunity. . to build . .  a Jewish state . . . in harmony with the truest interests of the British Empire. (page 29)

Myths do not die easily, but Stephen Gowans succeeds in trampling the myth of Winston Churchill into the ground. What is more, Gowans makes it abundantly clear that Zionism and anti-Semitism were and continue to be, fellow-travelers.

While the principal thrust of Gowans’ book deals with the planning and implementation of the Zionist project as the cornerstone of Anglo-French and later, U.S. domination of the region, Gowans provides a much broader perspective on Western imperialist aims in the Middle East, from the targeting of the Ottoman Empire as the initial step in achieving regime change to the recent attempt to supplant the Syrian government of Basher Al Assad through the creation of  and logistical support for Daesh (the Islamic State rebels) as a proxy armed force. In other words, Gowans’ work is important both for its historical perspective on Western colonization of the Middle East and its analysis of the current campaigns for regime change on the part of successive US administrations, be it Syria, Iran, Venezuela, or Latin America. Ergo, the past is also the present.

Gowans masterfully traces the machinations of Anglo-French and US subterfuge working through ‘quisling’ artificially created Arab monarchies (with the dissolution of the Ottoman Empire, Britain and France created fourteen countries out of the Arab world) and Israel as the principal henchman, to undermine and systematically destroy each and every Arab government (generally secular and devoted to the principle of ‘Arab oil for the Arabs’) which threatened the control of Middle Eastern oil reserves for the benefit of Western petroleum corporations and their shareholders.

From the Balfour Declaration announcing the proposed partition of Palestine, to the undoing of Abdul Gamal Nasser’s Egyptian pan-Arab secular nationalist movement (via the Muslim Brotherhood as proxy), to  the coup d’état orchestrated by the Eisenhower administration against Mohammed Mossadegh’s attempt to nationalize Iran’s oil reserves (putting the quisling Shah of Iran on the throne), to the quashing of secular nationalist movements in Iraq and Libya, to the logistical and financial support by the US, Saudi Arabia, Israel and Turkey to the Islamic State or Daesh as proxy for regime change in Syria, Stephen Gowans provides the reader with a detailed, heavily documented analysis of the use of subterfuge, proxy Islamist forces and propaganda on the part of Western colonial powers – in particular the United States – as the means of ensuring the continued control of oil reserves in the Middle East.

The most succinct summary of the role of Israel as Western henchman in the Middle East is the following:

Israel began as a European colony, established anachronistically just as the great wave of decolonization was getting started. As the United States superseded Britain and France as the dominant imperialist power in the region, Israel transitioned from the formers’ outpost of terror in the Arab world into a power projection platform for US investor interests.  Throughout this transition Israel has remained interlocked with imperial Power, unfailingly serving as the West’s beachhead in the Middle East. (page 214)

Sephen Gowans’ book, Israel A Beachhead in the Middle East is, by virtue of its content and documentation, a major piece of political analysis which sets itself as a principle reference for understanding the evolution of Western imperial aims in West Asia, from Sykes-Picot to the present crises in the region.

* Bruce Katz is a founding member and current co-president of PAJU (Palestinian and Jewish Unity), a Montreal-based human rights organization now in its nineteenth year of existence. He has been interviewed on numerous occasions by various media on the Middle East situation.